On this 7th day of August mom would have turned 73. This year also marked her 7th anniversary in heaven. Lots of lucky 7s.

Mom was indeed lucky as a child being the first born to survive. My Lola endured three miscarriages before my mom arrived. Since her birth she was the golden child — like all first-borns — getting anything and everything she wanted.

My dad would tell me stories my Lolo shared with him about mom like how she would have temper tantrums as a child, hurling her body on the floor until she got what she wanted. (Sounds familiar, huh, Dexter?) Little did she know she would then be followed by a little brother and sister. At this point she quickly assumed the eldest sister role providing support and guidance.

She was the first and only from her immediate family to migrate to the United States — on her own. With two small suitcases in tow she and a girlfriend landed in New York City. They settled in an apt in Queens that practically felt like an earthquake when the subway travelled by. Soon after they found work at the United Nations. And that’s where she met dad in 1969. Lucky for him 😉

Lucky for my sister and me too! Lucky for us to have a trailblazer as a mom who will always be our rock and idol. We love you and miss you, mom. Happy happy birthday!

Dare I say it? Finally it feels like summer here on the east coast with — so far — a full day of the sun’s rays and warmth.

What’s a girl to wear to celebrate the season? Leave it to my stylin’ mom to help set the trend in the sixties with a mod mini of her own design. Ah, long gone are the affordable days of being able to give sketches to your own seamstress to handcraft anything you dream up. Maybe when I hit the lottery I’ll do the same. Or I could just learn to sew. Or get Glenn to learn to sew. 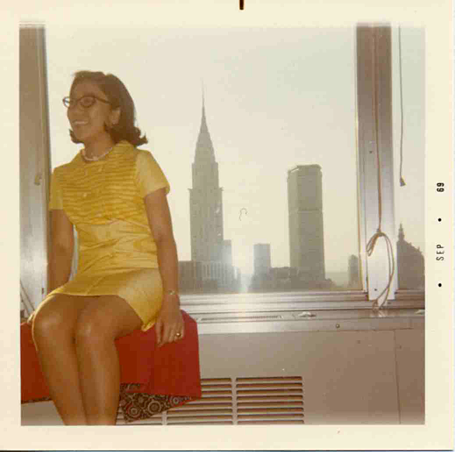 [Mom’s pic was taken in the Secretariat building of the United Nations probably during a lunch date with dad. Assouse!]

Pint-size fashionistas or their fabulous mommies need not search high and low for the perfect LYD (little yellow dress) this season. La Petite Couture has this darling number that’s never too fancy for any occasion. I see it gracing girls-only birthday soirees and garden tea parties. Or even a barefoot romp on lush [clean] green grass.

I’ve always adored tunic dresses. Likely due to my mom’s history of clothing dating back to the sixties—including ones she sketched and designed to then have made by a seamstress in the Philippines. They are so effortless and flattering. Here’s a gorgeous pic of my parents during their honeymoon to Ballwin, MO when she met for the first time my cousins Chi, Meesh and Mimi. How adorable are they + their tights?!? 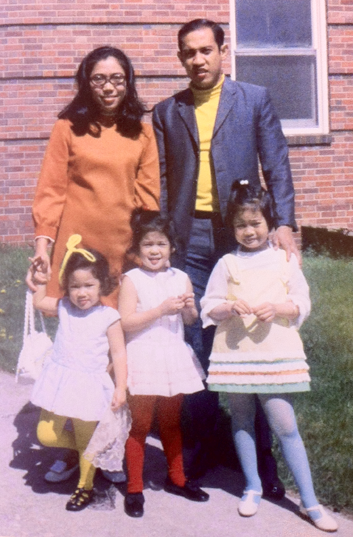 As an independent jewelry designer, I have so much admiration of others who also are true to their passions and are lucky to be able to make a living creating beautiful things. New York City based designer Grace Sun‘s line embodies both uptown chic & downtown cool. I can totally see my chic & cool quotients edging higher if this lil flirty number’s in my closet. It’s a featured and favorite piece at the premier online global network of independent designers — StyleTrek.com (brainchild of fellow Academy of St. Aloysius High School alumna Cecilia Pagkalinawan @ceciliaNY).

Or as the British say “Trousers.” [Fancy.]

Growing up, a lot of our vacations were spent in Ballwin, MO visiting my dad’s sisters and parents. Even with one suitcase she shared with my dad, she would still have perfectly prepared outfits for each day that matched the occasion. I always loved these fancy pants of hers and she loved pairing it with either this blouse or a loose deconstructed blazer. In this photo, my grandparents — Mama Rose & Papa Ceto — are showing her and my Uncle Monet (in the background) the vegetable garden diligently sowed by my Uncle Naning during a lunch at his and my Tita (Aunt) Josie’s home after church.*

This season, mom would surely adore these flower power slacks. I can see her matching it with her many tops—and purses. I would probably wear it similarly with a tee. Now if I can just find these turquoise shoes too, I’ll be good to go!

Apparently my mom. Well, back in the day (circa 1977?). She will always be my style icon and this pic goes to show that you gotta flaunt what your mama gave you — even if it’s going to an amusement park with your kid! 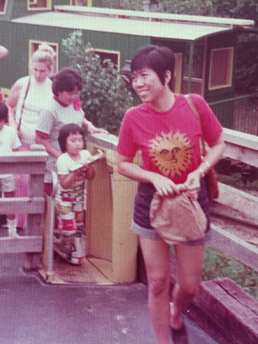 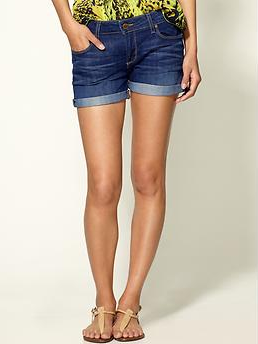 It all started with this picture. I see it everyday when I pass by the china cabinet where the urn of my mom resides. It’s literal stuck in the seam of the outside glass pane. How independent for a 20-something born and raised in what was then a rural town in the Philippines (Sta Rosa, Laguna) to set off for Europe with some girlfriends in the mid-60s. I don’t think I ever had that drive even in my late 30’s when I was at least financial secure to pursue something adventurous like that.

As I admire pictures of my mom through the years, I realize that they have so many stories to tell. Although she is no longer here to share them, I recently have found inspiration in all these imagery from how she carried herself, her fashionable style to the simple expression on her face.

I’m looking forward to honoring my mom with this blog and sharing how much she is still a part of my life.